How do families spend their time? Explaining the big shift for men and women over the past 50 years

Women’s bargaining position in the household is instrumental in the dramatic shifts evidenced. 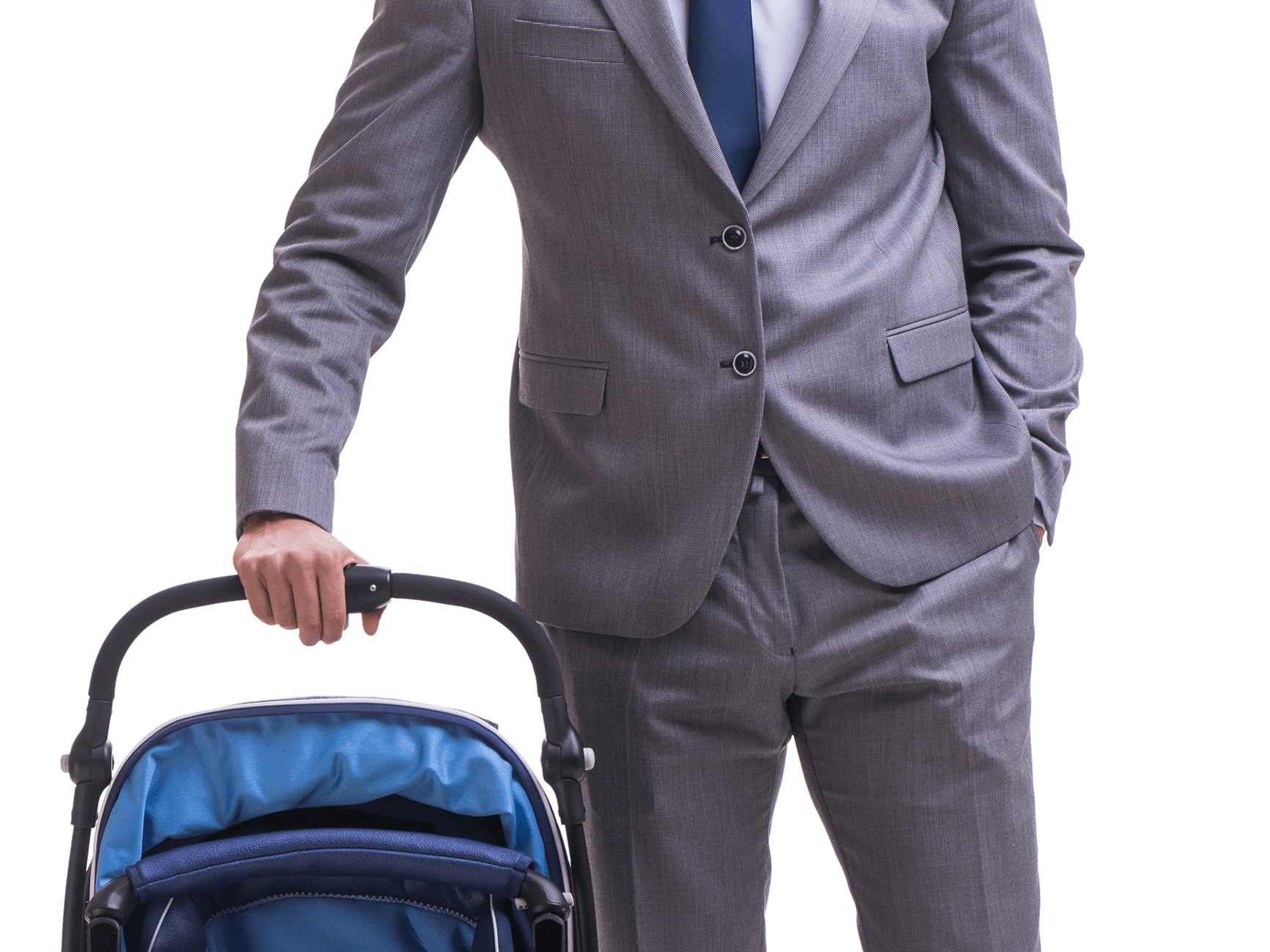 A combination of a narrowing of the gender wage gap and improvements in women’s bargaining position in the household has led to a dramatic shift in the way men and
women use their time over the past half century. That is the conclusion of new research by Alexandros Theloudis, presented at the annual congress of the European Economic Association in Manchester in August 2019.

These changes do not concern the United States alone: other developed countries experienced similar trends. The question is why?

The new study develops a model of time allocation – work, chores, childcare, and leisure – for a married couple (Theloudis, 2019). The spouses choose their time use given their wages, the age of their children, technology at home, and their respective bargaining power in the household. Such power relates to one’s financial and family prospects if they divorce from their partner – what economists call an ‘outside option’.

Using data from multiple cohorts of American men and women, the author finds that at least two factors are important for generating the observed time dynamics. First, the
gender convergence in wages over the last decades – what economists call narrowing of the gender wage gap. Second, improvements in women’s bargaining position in the
household. 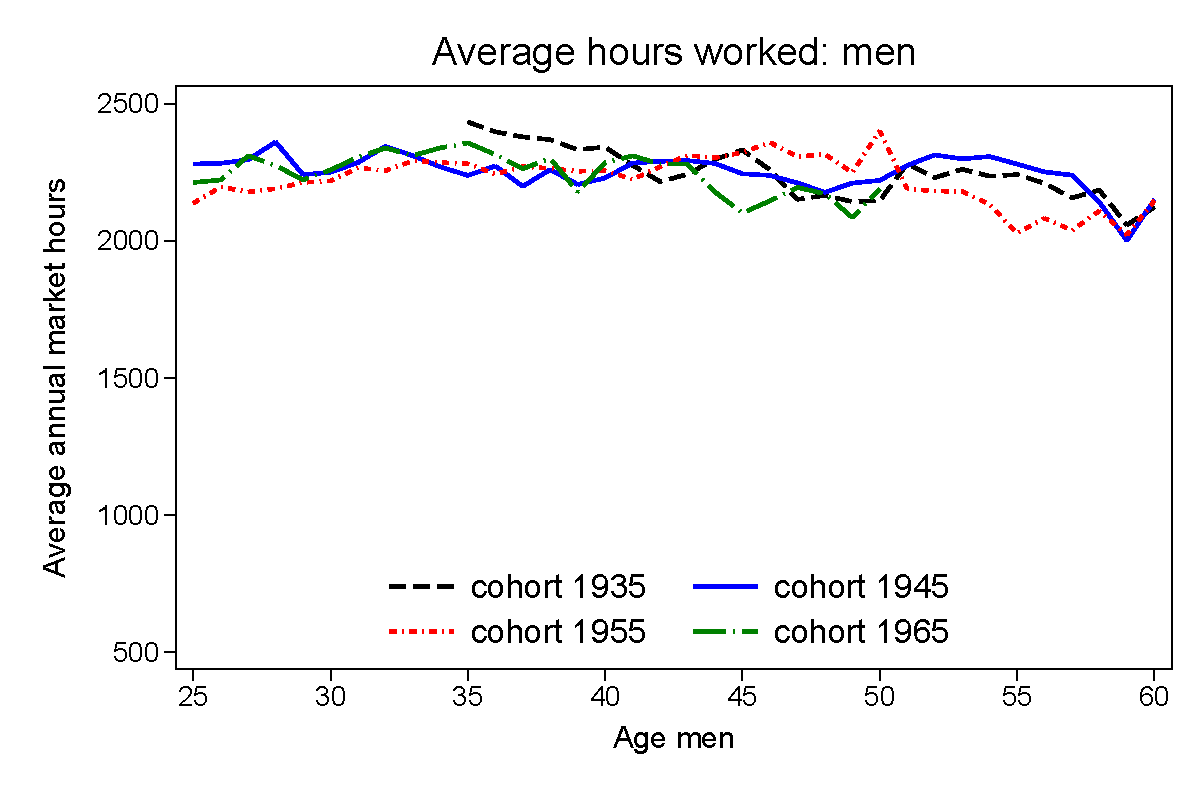 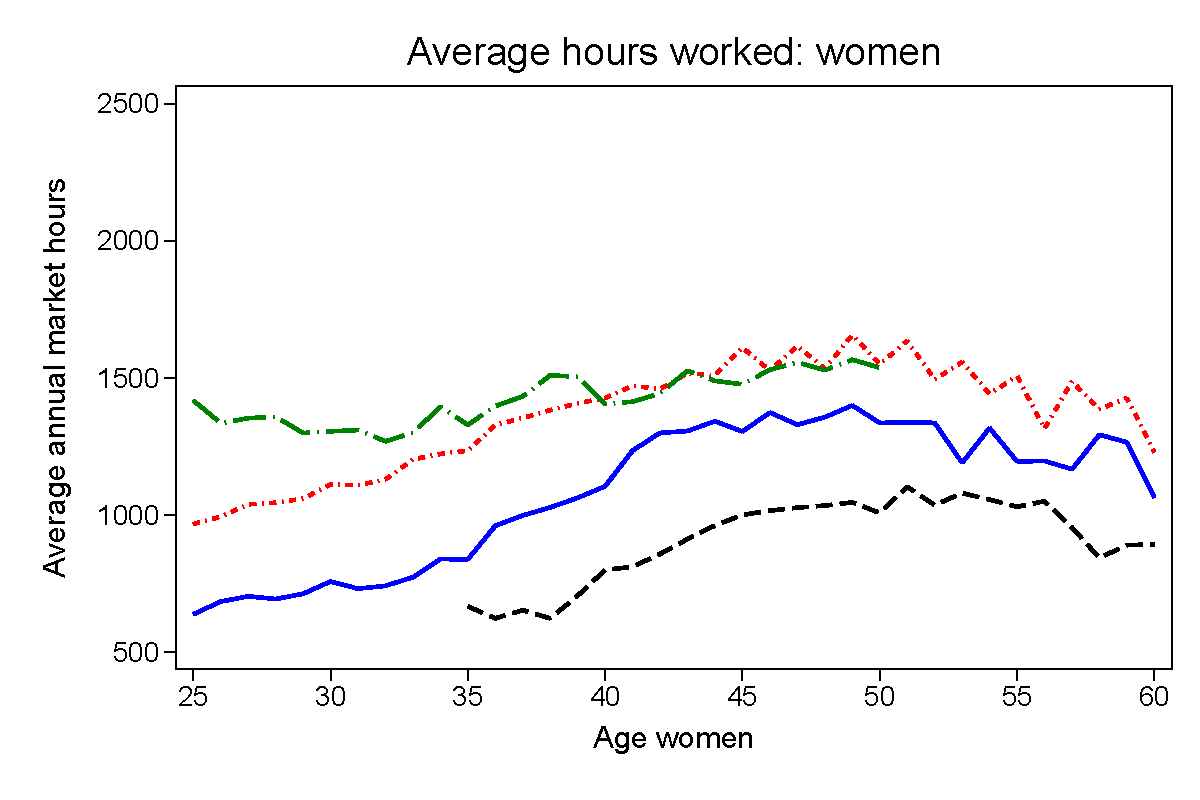 Women reduced their chores from 30 hours per week in Fonda’s cohort to 18 hours in Obama’s cohort (Fig.2). Men born in the 1930s, such as Jack Nicholson, spent
approximately 6 hours per week on chores, while those born in the 1960s, like Michael Jordan, spent 8 hours. In addition, far fewer men in Jordan’s cohort do not contribute to chores at all compared with Nicholson’s cohort (Fig.3). 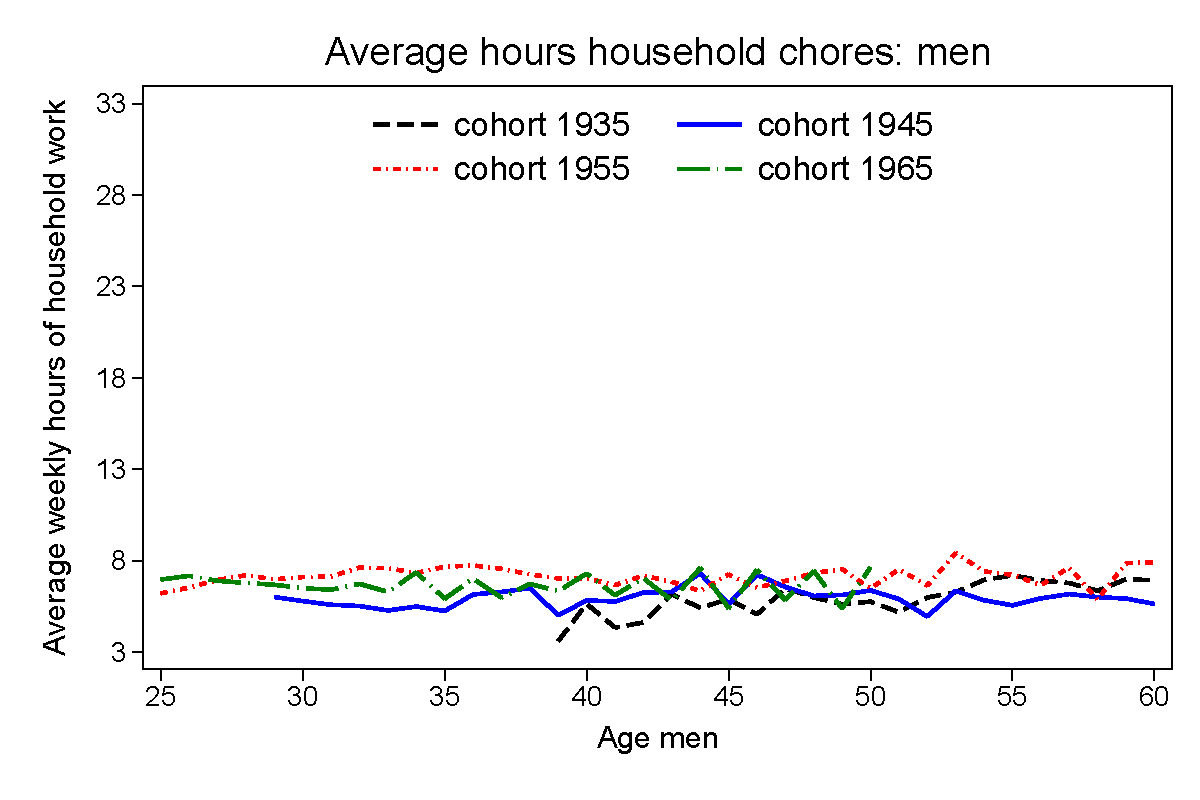 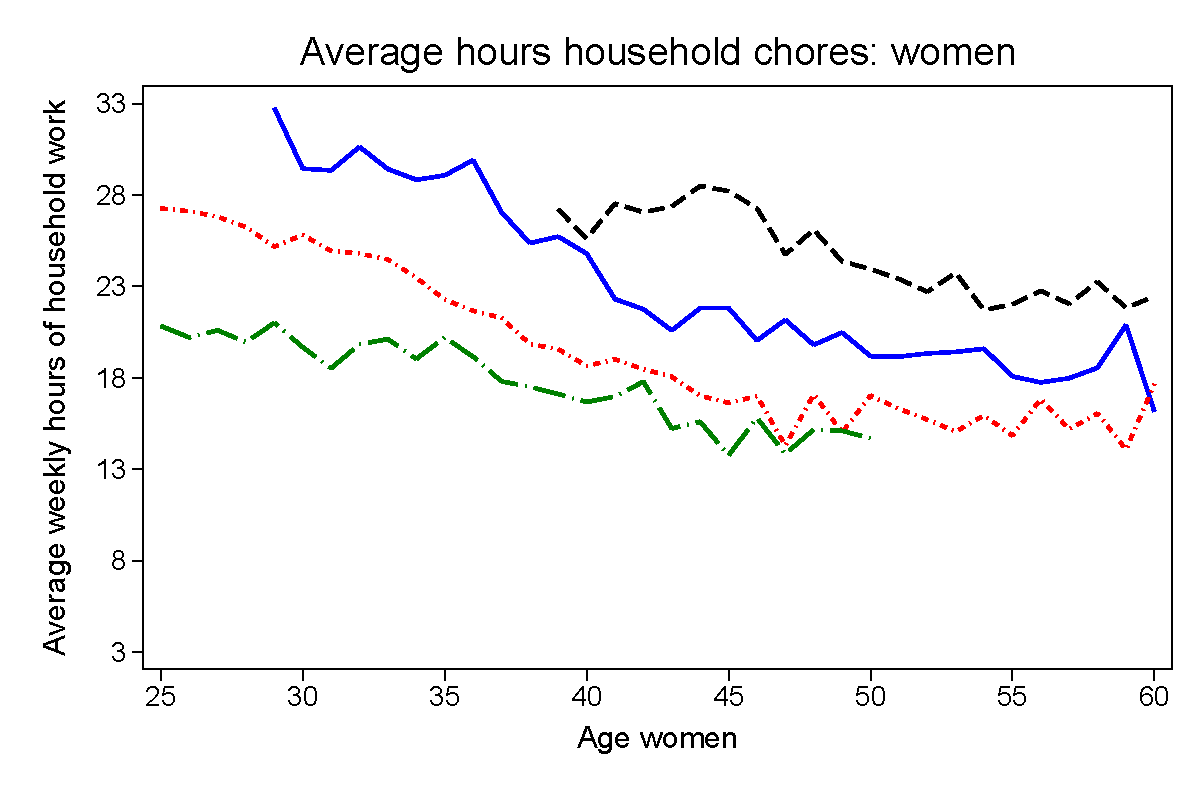 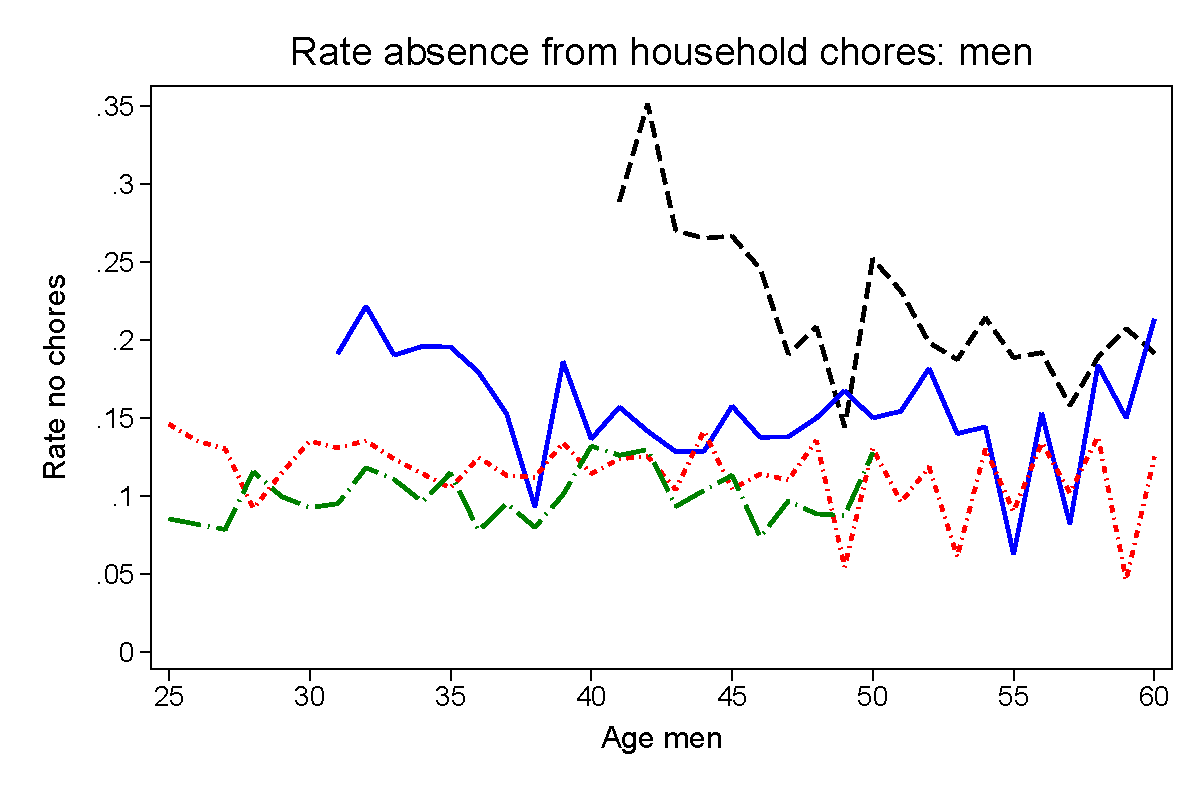 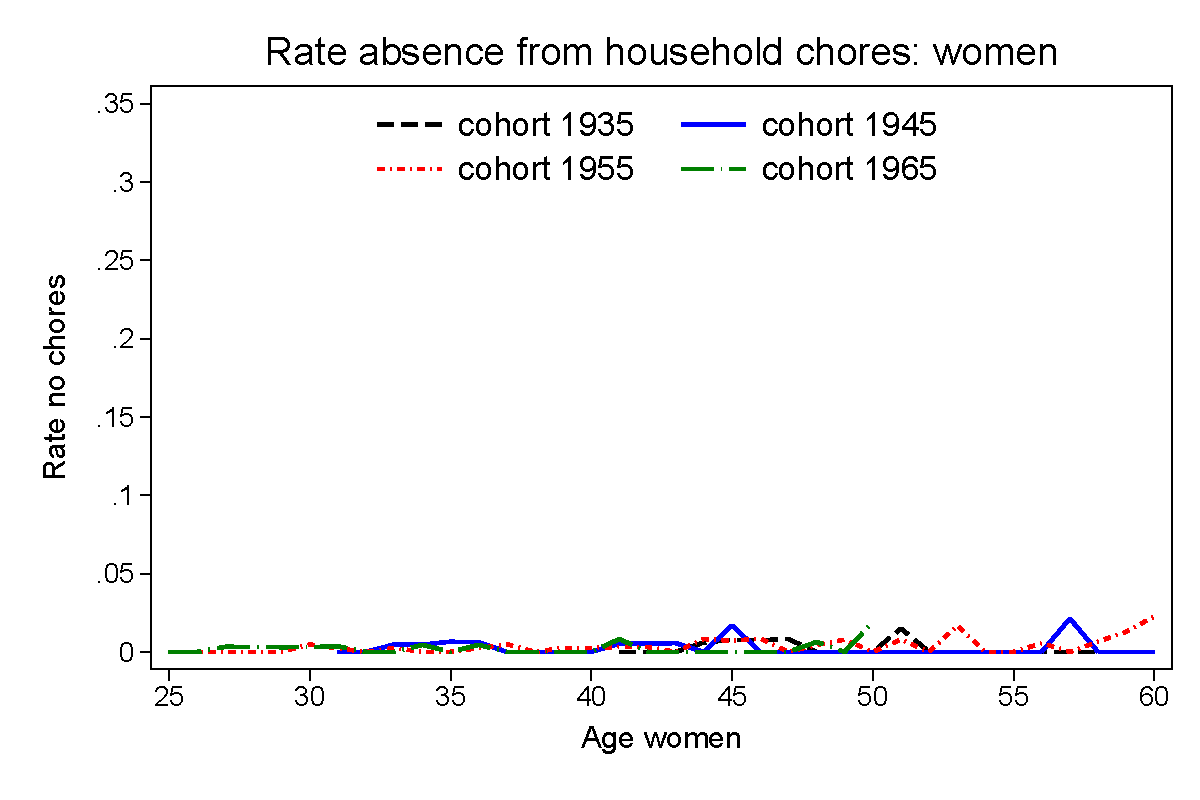 Figure 3: Rates of absence from chores

These changes are gradual over time, occurring little by little in each cohort between Fonda/Nicholson and Obama/Jordan.

This study uses a model to discipline the various time allocations and quantify the factors driving them. In the model, men and women may have different tastes over various time uses; education and experience determines their present and future wages; spouses can divorce unilaterally consistent with the US divorce laws of the 1960s.

As the gender wage gap gradually closes down in favour of women, women enter the labour market seeking full-time jobs. Moreover, better technology at home (such as cheaper appliances and services) facilitate this dynamic, ultimately moving woman away from chores. As women accumulate work experience, their wages increase, further reinforcing this cycle and marginally ‘crowding out’ their husbands in the labour market.

At the same time, women’s relative bargaining position in the household improves, reflecting their improved outside options. This results in a transfer of chores to their husbands that other factors alone, such as the narrowing wage gap or technological improvements, cannot generate. It explains men’s gradually larger involvement into chores and childcare.

A model without chores or childcare will likely not imply gains in women’s bargaining power, so models of family decision-making, which typically only model labour supply, must also account for these choices.

These findings are suggestive of the likely implications of eliminating the gender wage gap (Theloudis, 2018). If men and women had similar work experience and wages, women’s rates of market work would tend to mimic men’s.

The same applies to childcare, where men would further increase their involvement, and chores, where women would further reduce theirs. The increase in female work would be particularly strong in the childbearing years, driven by women starting work when they previously abstained.